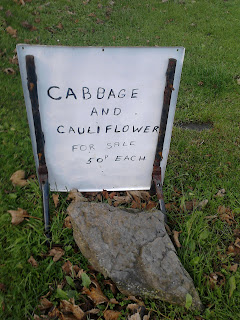 Aside those who have the resources and inclinaton to grow their own, some would argue that local food isn't for the masses. They'd argue that its for those 'foodies' or not worried about a budget. I'm sorry but 50p for a cabbage or a cauliflower is cheaper or more frugal if you like than anything I can buy in the local shops or the supermarket - I'll have one of those, thank you. Brassica's (of which cauliflower and cabbage are part of this family) arent' something I have the space to grow myself. So, I let other's do it for me and rather selfishly reap the benefits. So for those saying local food isn't affordable and for the general public I'd say.

My wallets tighter than a ducks whotsit as I'd rather spend money on the garden, adventures or just nonsense, BUT, I like cooking, so if I can find good local ingredients for not alot of money, I'll spend the rest on plants. Just don't tell the family!

Some may say, well that's easy for you lot in the countryside. Well I'd argue probably not, I also live on an island in the far north of Scotland, with a hop and a skip I'd be in Norway (or Shetland, or Greenland), the climate for growing food is challenging and there's not what you'd consider alot of 'bargain basement' living up here. However, if you introduce the concept of trying to find what's not imported from the mainland of the UK or Europe, for less money, your options widen.

Now that we don't have the hens, my eggs are free range and organic - they come from a lovely friend for £1 for a half dozen.
My milk is local and cheaper than the supermarket alternative and travels less than 15 miles to my house (OK its probably less than 7......but I'm being conservative). When I can't find this reduced in the local supermarket, I buy this at the local shop.
I buy just the fish I need not prepackaged amounts at the local fish place, which doesn't charge the earth as everythings local and seasonal. What's prolific, or in season is cheaper.
Meat I can buy locally at the supermarket, and whilst that's pricier than the local butcher, I mix and match.
Fruit - I can't source here except rhubarb - so I shop around for bargains or what's in season or fair trade.
Veggies I buy what I can't grow, and if I do, I buy locally and  seasonally and you'll not get a better deal.

So perhaps, have a wee peek and a look about. Whether its in the supermarket, your local shop with a basket of local stuff, or the man down the road with a decent veggie garden and a surplus to sell and a wee sign outside his garden. You never know what you'll find. So think again about local food and what's seasonally available in your area. On the sustainability pyramid, local is considered up the top with many other fine foods!

For more 'Frugal Friday's' pop over to Robyn's patch to catch up with her and others frugal posts! And if you read Wittgenstein's Watering Can's latest blog - you too can debate the merits of how much grow your own does (or doesn't save you!).